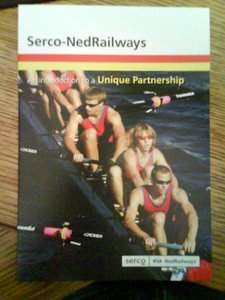 This was sent by Dutch firm Serco, in partnership with NedRailways, who have put in a bid for the West Midlands rail franchise. Ok, all fine so far; apart from there being a bunch of rowers on the front cover. Well I suppose that is covering all contingencies - still hardly inspires confidence for a company bidding for a RAIL franchise

Comments:
Barry
Does your view change at all if you know that Serco is a British company, and we Brits are not bad at rowing!

Yes, it's Ned that are Dutch - Serco's HQ is in Hampshire.

I suspect the rowers are supposed to relate to the 'unique partnership' mentioned in large print on the front of the brochure. Not exactly an impossible code to crack is it?

The two of you anonymorons need to get out more.

is this the Serco fan club? my view of Serco does not change at all, and I am sorry for falsely labelling Serco Dutch. The Dutch play cricket so are not a bad bunch at all.
Unique partnership for a rail franchise bid represented by a bunch of rowers...no, it's not an impossible code but it is a fucking daft one - unless, of course, the trains are going to be powered by rudders and every train will have a cox. No, for me, what best shows a company who are bidding for a rail franchise would be something like...oooh i don't know...a picture of a train? Some track maybe? Maybe a shot from inside a buffet car? Not a bunch of rowers.

Actually I do rate Serco, but I'm more exasperated with the cheap shot - the document you show is almost certainly describing or introducing the joint venture between the two companies not the detail of the rail operation. But it's much easier just to imply that the bid is a pile of toss because it has a picture on the front you think is stupid...

Serco operates trams in Manchester, the DLR in London and two other contracts in the north of England and Scotland as well as at least one long-distance service in Australia - doubtless not perfect but well respected.

Anonymoron? Maybe - but the blogosphere needs a bit of balance so obvious errors deserve to be challenged.

Please do not feel unwanted here, and you are right in saying the Blogosphere needs balance.
the point i would make is that i haven't said it is a pile of toss. i am aware of serco's operations but the fact of the matter remains that it is a silly picture. this is not reflective of their bid, or their relationship with NedRailways. If you cannot see that this picture has opened itself for a jibe, then i fear you might be just a little too tense.
i don't know if you visit my blog regularly, or at all, but it is not always a forum for fact and considered opinions, but i'm sure you would have rumbled that one already.
the only obvious error i have made is calling Serco Dutch, for which I have already owned up to.
now take a valium and rest assured that if i see any other submissions and should they have a picture of a submarine, or a Robin Reliant i shall jibe away again. No matter how unique the partnership may be.

Fair enough... As long as I can continue to disagree :-)