Slow out of the blocks 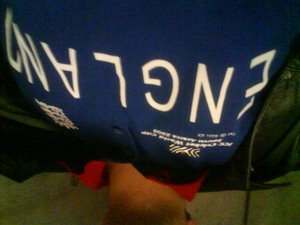 Today the world forgot her worries and bore her countenance upon England and the Cricket World Cup. Jeez they'd be plenty disappointed. A Nixon/Plunkett rearguard saw England to respectability,* but despite having the upper hand at 19-3 and 70odd-4 England never looked like they were gonna win. The Collingwood/Dalrymple making a 5th bowler idea was blown to bollox, and New Zealand relatively coasted home. Food for thought, but with two supposedly inferior opponents up next England need two convincing victories to finalise a best XI and make a play for the World Cup. I, like you, remain hopeful. Come on England (and Wales)

* Not all doom and gloom, KP looked good today.

What a weird weekend for cricket. India and Pakistan out (Ireland!) oafish Flintoff, the ropy performace against Canada - and now Bob Woolmer.

On the England discipline front did you notice that Snape and Shine (soudling like a bad TV cop pairing) were in the same nightclub with the Rumours Five? Bit of a blurring of the line between managment and players there.

And in terms of the performance today vs Canada, they really need to do something about the run rate. Drop Bell or Joyce for Strauss? Open with Bopara, who in my mind has to replace Dalrymple whose bowling is getting worse? On current form we're dogmeat for SA/SL/Aus.

clearly india are not out. ;)