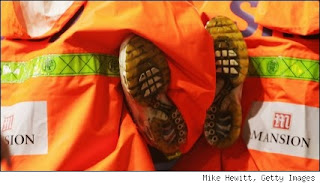 Last night I watched the United/Middlesbrough Quarter Final replay and thought it was a good match and, I'm sorry to say, I thought it was a definite penalty. However, the Boro bench interpreted it differently and, allegedly, a shout of 'cheat' eminated in the direction of the United bench. Incensed by this Carlos Queiroz, bag carrier extraordinaire, sought revenge and went for the bench, or more aptly the Boro assistant, Malcolm Crosby. Mere handbaggery though, if truth be told. Contrast this with White Hart Lane where after the final whistle, a fan got onto the pitch and tried to lay one on Frank Lampard (a punch rather than a kiss). Lamps ducked and then security got some digs in. If you want to read a good report of the incident read this. That's good, if you agree with security being allowed to beat supporters with bats, which let's face it you probably do (if only for a laugh). It's also where I lifted the great photo from.
Of course, violence in football is not a new phenomenon. As an example, I'd like to bring your attention to this hitherto unseen footage from an old Auld Firm derby.