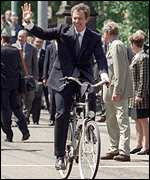 Calling someone the best-ever Prime Minister is such a silly idea; one man's meat is another man's poison and all that. Of course, he's the best thing to happen to Britain for decades, but that is because before him Britain suffered under 18 years of Tory evil. Of Tory policies designed for the rich and their mates. A Government fascinated by the price of everything and the value of everything. A Government that ripped the heart out of numerous communities and numerous industries.
Talk of Blair's legacy is equally daft. The only Prime Ministers in recent times to have left a legacy are Churchill, Attlee and Thatcher. Churchill for World War II, Attlee for the Welfare State and Thatcher for stealing our milk. When Lady T passes away, and she will, loads of people will be happy, very happy and will remember every single callous, heartless decision she took. Now that's a legacy. Blair? He was just a man doing a job.
Just one more thing though Tony...BACK MCDONNELL