A case of Moore being less 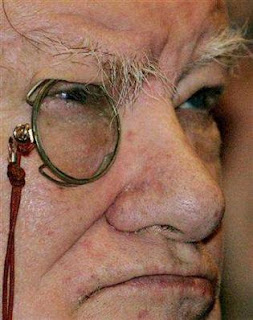 Octogenarian prick, I mean institution, Sir Patrick Moore has vented his spleen (due to fury rather than age) in the direction of women. Man's man Moore says that since he began working in television the standard of programming has worsened. Some people might agree (although personally I think a reality TV show to find the next Superhero is the zenith of televisual capability) but Moore puts the guilt firmly at the feet of one set of people. Yeh, it's women. Women those dirty, lying, hard-nosed bitches have only gone and ruined it all. Logie Baird would be spinning in his grave (or rewinding and fast-forwarding perhaps?).
Anyway to the wise sage's words: "The trouble is that the BBC now is run by women and it shows: soap operas, cooking, quizzes, kitchen-sink plays. You wouldn’t have had that in the golden days." Ok then tv fans, a quick quiz:

1) What was the first British soap opera?

4) What the fuck is a kitchen-sink play?

5) In the 'golden days' did millions of poor saps tuned in to 'The Sky at Night'?

Answers at the bottom.

"I used to watch Doctor Who and Star Trek, but they went PC - making women commanders, that kind of thing. I stopped watching" continues nut-job Moore. I don't like Dr Who and have commented on it before here quite near the bottom of the interview, but the whole thing is worth a read if truth be told), but I recognise that this Tennant Doctor is a bloke. His assistant is a bird, but haven't they always been? And Star Trek? Well if that's what you're into watching I don't think it matters if the Commander is a bloke, bird or someone with a cornish pasty implanted into his forehead. It sucks more than a WAG after a handbag.

Sir Patrick (How did he become a knight of the realm? Through being old, sexist or having appeared the most times on Through the Keyhole?) also believes that Eastenders is realistic. Have a look at this? Is this realisitic? Fucking hell, you're spending too much time looking up telescopes or kaleidoscopes or whatever the fuck you do.

1) Coronation Street. First broadcast in December 1960 and devised by Tony Warren. That's Tony as in Anthony and not Antoinette, i.e. a man.

5) Yes. I imagine the only good thing about the Tory-inspired three day week was not having to watch this toss. And Brian May (guitarist in the worst band in the world ever) is a frequent guest.

Comments:
and, as some very good looking chap mentioned in another place, Doctor Who was originally produced by a woman.

And as everyone knows, TV is in fact controlled by the gays. And jews

It was brought into being in the 1950s and 60s - plays/films such as Saturday Night and Sunday Morning, A Kind of Loving and Kathy Come Home.

Well, I guess you can remember those, eh?

Thanks for the fight clip Barry - the best fight for ages - since the muddy one anyway!

The fight was good but you know what would really turn me on? Pat Butcher & Big Mo banging each other! Oh yeah baby!

seen. i feel much the same. when it's up on YouTube, it'll be down on the Beef

(In the voice of Vicky Pollard) Wow! That clip was sooooooooooo realistic. Cheryl said a fight like that happened just the other day down my road...yeah but no but yeah but........

Hey, while searching for widgets for my blog, I stumbled upon www.widgetmate.com and wow! I found what I wanted. A cool news widget. My blog is now showing latest news with title, description and images. Took just few minutes to add. Awesome!