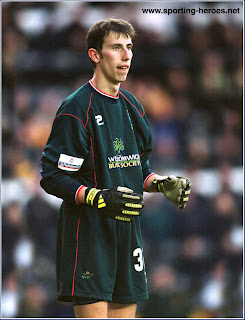 Super ugly Chris Adamson, generously labelled on Wikipedia as the 'worst goalkeeper in the English league'*, is one of five players not to have his contract renewed**. Joining Adamson are Steve Adams, a man with an intimate knowledge of the treatment room; Barry Corr, who will porbalby sign permanently for Paul Sturrock's Swindon; Andy Broadbent and John Hills, who I rate quite highly but who has been injured for most of the season.
Four players have been offered new contracts: club captain Lee Bullen; superstar Deon Burton; shit-hot Steve McLean and youngster Sean McAllister***

* before some goon removed this deserved epitath.
** this is not hte first time Adamson has been released by Wednesday, but last time Sturrock failed to get a back-up keeper and ended up re-signing the hapless one.
*** at the ripe old vintage of 28, I can call him a youngster.