3 is the magic number 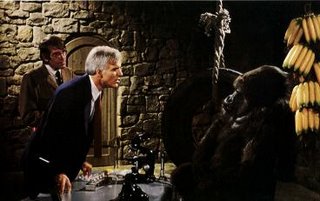 A while back I started pontificating on the subject of fantasy comedy - my top ten film comic characters of all time. The first two inductees were Sergeant Frank Drebin, Detective Lieutenant, Police Squad and Ace Ventura, Pet Detective and, to be honest, I forgot about the whole idea. However, on reading the latest issue of Total Film I read a compilation of the 25 Greatest Film Comedians Ever - I'm sure that's just a coincidence, you know great minds and all that; but it is pushed me into finishing the list. Here is number 3: Dr Michael Hfuhruhurr - remember Dennis Pennis getting Martin with: "Hey Steve why aren't you funny anymore?".
Well let this serve as a reminder, Martin was da man:

Girl: Sounds like a subdural hematoma to me.
Dr. Michael Hfuhruhurr: Oh, it does, does it? Well, it's not your job to diagnose.
Girl: But I thought...
Dr. Michael Hfuhruhurr: You thought, you thought. Just go. Three years of nursery school and you think you know it all. Well, you're still wet behind the ears. It's not a subdural hematoma. It's *epidural*. Ha.

Dr. Brandon: Well, Dr. Beckerman was murdered in Europe - you know that.
Dr. Michael Hfuhruhurr: Exactly. Not only is he dead, he's six thousand miles away.

Dr. Michael Hfuhruhurr: Would you read that last bit back to me? I'm afraid it might make me sound pompous to your readers.
Journalist: 'My brilliant research in brain transplantation is unsurpassed, and will probably make my name live beyond eternity'.
Dr. Michael Hfuhruhurr: No, that's all right just take out the 'probably'. It makes me sound wishy-washy.

Dr. Hfuhruhurr: But there's only one other person I'd trust to perform this operation — Beckerman!

Are you a fan of the Jerk?:

Mother: Navin, it's your birthday, and it's time you knew. You're not our natural-born child.
Navin R. Johnson: I'm not? You mean I'm gonna STAY this color?

The Jerk is a classic and is in my DVD collection as well as other Martin flicks: Dead Men Don't Wear Plaid and All of Me but Two Brains (not Willetts) is the best.

Agreed. I'd also add in Dirty Rotten Scoundrels, Planes, Trains & Automobiles and Bowfinger - the latter probably the only decent film he's done in the last 18 years

I agree The Man with two brains is one of my all time favs. Noww all he does is crappy made of kids comedies. What a way to go....