The archetypal arsehole is Bill Murray and Big Ern is just so cool. It's hard to fully convey his genius in words alone, his mannerisms and presence just makes for a film-stealing performance.

But he does say funny things too:


Roy Munson: You two know each other?
Big Ern: It's a small world when you got unbelievable tits. 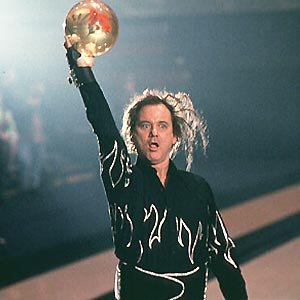 [Roy Munson is getting ready for his turn to bowl]
Big Ern: It all comes down to this roll. Roy Munson, a man-child, with a dream to topple bowling giant Ernie McCracken. If he strikes, he's the 1979 Odor-Eaters Champion. He's got one foot in the frying pan and one in the pressure cooker. Believe me, as a bowler, I know that right about now, your bladder feels like an overstuffed vacuum cleaner bag and your butt is kinda like an about-to-explode bratwurst.
Munson: Hey. Do you mind? I wasn't talking when you were bowling.
Big Ern: Was I talking out loud? Was I? Sorry. Good luck.

Reporter: What's the story behind this paternity suit against you?
Big Ern: It's not a case. The woman's a stone-faced liar. Let's not talk about that. I pulled out of her really early on that one.

Big Ern: Do me a favor, will you? Would you mind washing off that perfume before you come back to our table?

Comments:
Just a word beefy old pal. Have you heard from Lord Lucan or just as his namesake has he done a runner? I'm not prepared to keep on hitting his site for false stats as he hasn't done an update in quite a while.

Lucan is off for most of Recess.