A bolt from the blue Czechs in a Plainmoor 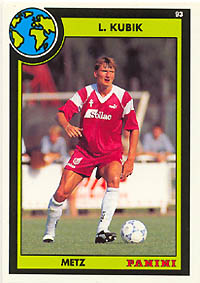 Torquay United are perhaps not the most glamorous or talked about football club in the land, but I do have a kind of soft spot for them; mainly in part to an ex-Comrade moving down there after leaving PCH; Garry Nelson's excellent Left Foot In The Grave and that when I was there with my girlfriend I found a shop that sold Sheffield Wednesday cards and that the proprietor was an Owl (a Sheffield Wednesday fan rather than a pellett-emitting bird of prey capable of rotating his head 360 degrees and thus eliminating the blind spot).
And for a club seemingly pernenially plagued by mediocrity, this week has been something of a 15 minutes of fame, ok 15 minutes of recognition may be more accurate. The Gulls have made the backpages for two reasons. Firstly, their new(ish) Chair Chris Roberts, who replaced previous head honcho Mike Bateson, unveiled an anti-diving policy to operate on a three-strikes-and-you're-out (as in transfer-listed or sacked) policy. And secondally when Roberts, who himself forged a playing career and, self-evidentally, a considerable reputation in the Czech Republic, announced that current manager Ian Atkins was to be shuffled upstairs (just like the late Thora Hird) and a mystery former Czech Republic international was to be installed as the brand new, shiny coach at Torquay. All this mystery is just like the early-90s heyday of the WWF. Today it was revealed the man in question is Lubos Kubik. Well, well who'd have thunk it? I remember Kubik turning out for Czechoslovakia/the Czech Republic during the 90s and was over the moon to see on Wikipedia that I had remembered correctly and he wore the number 9 shirt in the 1990 World Cup. He is a defender and so should never wear a striker's number.
I hope Torquay go from strength to strength and that this appointment sees Kubik return to form after a frankly disappointing effort in Eyes Wide Shut.