Flip, flop the return of the foreign flop 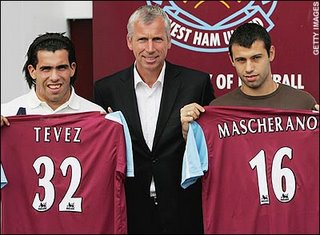 Looking down through the Premier League and find one club who has not signed a player who turned out to be a total waste of money. Well I'll do a quick off the top of my head list and feel free to add others:

Obvously there are a few I would have missed out but the reason for doing this list was not just cathartic but also to draw your attention to flops Tevez, Mascherano and Luque. The former two are, to my mind at least, good players yet to find their feet chez the Boleyn and the third is just useless. amazingly, it appears that Barcelona are in for Luque whilst Tevez and Mascherano may already be heading back ot Brazil this time for Flamengo.
Freedom of labour movement. God love it.

Comments:
What's alarming is how many of them are World Cup winners: Ibrahim Ba (best hairstyle ever!), Stephan Guivarch (worst striker ever!), Marco Materazzi (c*nt) and one you've missed out, Kleberson.

Can't think of anyone else to put on the list just yet ...

I always thought Kleberson was all right, so he wasn't missed out, but intentionally left off. Surely the shittest WC winner ever to play in the Premiership was Roque Junior. Egad, he sucked balls.