Have a close look, we might not be seeing them again for a while. Am absolutely gutted. A totally abject England performance has handed the Ozzies the initiative and a 2-0 lead in the Ashes with 3 tests to go.
Things to do:

1) Kick out Jones (forever) and bring in Read
2) Repeat step 1 but replace Jones with Giles and Read with Monty
3) Mahmood in for Anderson for the next time
4) Please note the difference between point 3 with points 1 & 2. Anderson dropped for one test due to form and pitch, Jones and Giles to be booted full-stop (gramatically and emphatically).
5) Win or not, get rid of Fletcher at the end of the Ashes.

Ok so the last point may be a bit harsh, but thinking with clarity; is it really? Cases for the prosecution would point out: the abject form of Steve Harmison; recalling and then keeping GERAINT FUCKING JONES IN THE TEAM; picking a rusty and out of practice Giles over the more economical, wicket-taking Monty Panesar: the best spinning prospect England has produced in decades; taking Trescothick out to Oz when he couldn't have been ready; not giving a wicketkeeper a central contract; our woeful one-day form; not doing more to keep Troy Cooley and getting humiliated in the Champions Trophy in India but still coming back to Blighty for a week or so prior to going out to Australia to acclimatise, practice and maybe play some cricket.
Case made. 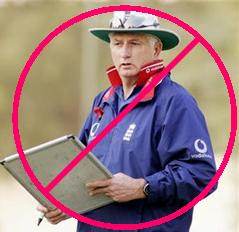 Comments:
Only one word for it: dire.

That performance has left me feeling ill.

Only one word for it? I don't know - how about abysmul, embarrassing, awful, shambolic, pathetic..?

So there we all were, counting our chickens and they hatched as bunnies.

BB, I couldn't agree with you more.

I think Fletcher should go. He's been around far too long. Need some fresh perspective... and his book after the last win didn't help either!