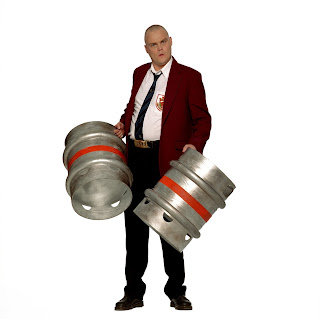 Any one who knows me would know two fundamental things: 1) I enjoy comedy and 2) I have a hell of a lot of hates. Last night I went to the London Studios in Waterloo to see the filming of Al Murray's Happy Hour chat show. I quite like Murray's schtick and although I hadn't seen any of the previous shows I thought it would be good to go. Wrong.
As we filed into the studio, it became apparent that Queen was being played in the background (I have pretty keen ears for background music). This is bad as I have a bordering on the pathological hatred of Queen. I commented as much to Dudley Eyebrows (25) "I have a bordering on the pathological hatred of Queen" said I, assuming Eyebrows not to be a mind-reader.
Anyway after one song I thought I had coped valiantly and awaited for the next tune. Queen again. Not good. And then Queen again. By this time it dawned upon me that they were playing a Queen album. Nothing gets past me.
It was horrible. Not only do I loathe their music, I find it very hard to physically cope. I get agitated and irritable. Eventually, the show started and it was pretty good. In an OK kind of way. And then there was to be live music from...McFly. Oh f*ck me, what a treat. The enfants terribles of sh*te music. Oh well. One song is tolerable, after all I had just tolerated about 3/4 of a Queen album without puking. Not even a single dry wretch. So they go through some tune with the little lads leaping around intermittently like the angry, young rockers they are.
And then it got worse. Much worse. As bad as the feeling one gets when England are losing in a World Cup Quarter Final penalty shoot-out and Jamie Carragher steps up. Apparently, in this series Al Murray gets every musical guest to do a version of a Queen song. Sorry, I've misheard. Surely not. Hopefully not. Oh f*ck, no. Not only that but everyone in the audience is obliged to get to their feet and dance. Whilst waving a Union Flag. I would say it was the most uncomfortable 3 minutes of my life but memories of Nicholas Cage dressed as a bear and punching women are still fresh in my mind.

I'm sure you appreciate that it is all done in a post-modern ironic way.

Al Murray may well hate Queen as much as you do, but he has created the sort of character who would see Queen's Greatest Hits as the best album in the world ever.

Having created the character he has to follow the rules because if we didn't have rules where would we be?

Dont know how I found this page but you sound a bit of a cunt to me.