Keeping up with the Joneses. 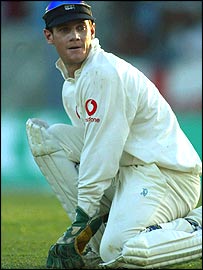 After a great test of thrashing the Pakistanis at Old Trafford, England have dropped Geraint Jones, the batting wicketkeeper who has recently dropped the batting bit from his CV.
The 150* Read smacked off the Pakistanis must be fresh in the memory and most commentators have been calling for Jones' omission. Such as here, here and here.
Jones had been struggling with a fracture to his finger obtained whilst batting (bad luck really as he wasn't at the crease for that long) but it was thought that he would be retained in the squad with another keeper called up as back-up. However, this call seems that Jones has been dropped irrespective of his injury.
Hopefully Read succeeds straight away, as previously the selectors have not shown that muhc patience with him - in contrary to Geraint Jones who kept in 31 successive test since taking the gloves off Read for the last test in Antigua 2004.