Freedom of labour: another foreign flop 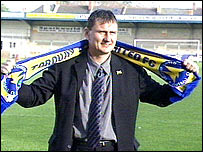 It happened last week and I am ashamed not to have documented it earlier, Lubos Kubik has left Torquay United. No points at all if you ask 'who is Lubos Kubik?', but full marks should you know he was the Czechoslovakian defender who heinously wore the number 9 shirt in the 1990 World Cup and who went on to briefly managed Torquay United.
Foreigners with massive (at least proportionately to where they have gone) reputations who have failed, miserably, in England. Well, let me think - for every Prosinecki at Portsmouth there are a load of flops...Ramón Díaz as manager of Oxford United springs to mind; Roberto Mancini playing for Leicester City; Thomas Brolin at Leeds and Palace and Attilio Lombardo at Palace (now Lombardo was a good player, Brolin a fat, idle waster (who I believe went back to Sweden to sell hoovers), Square Football's version of Palace's Terry and June: (On Lombadro being appointed manager)The snag was that the Italian couldn’t speak a word of English which produced the 'Odd Couple' combination with the Swede Thomas Brolin, who presumably kept a straight face when asking the players for more effort. Eventually the club finished bottom but Lombardo stayed with the club in Division One.); Taribo West at Plymouth (the lunatic claimed to have been told in a dream to sign for Plymouth and was on an annual salary alleged to be in the region of £600,000 - tragically, he ignored the dream he had where he was offered the chance to host Deal or No Deal). A (dis)honourable mention should also go to Javier Mascherano.
Football: it's a funny old game. Any other foreigners with massive reputations who did absoutely nob-all? Maybe, World Cup winner Roque Junior at Leeds? Although, I am particularly after the more improbable, rather than plain shit, examples.

Update: The Lib Dem MP for Torbay, Adrian Sanders, who if memory serves was once voted 'Hardest Working MP', has drawn my attention to his own blog where the Torquay fan has posted a frankly scary homage to Lubos Kubik. Now will he reciprocate and link to me?


You may also like to link with the following URL.

I am glad you have taken an interest in this subject. I'll link to you. Fancy linking to me too? Come on you MPs love a bit of this you'll scratch my back, I'll scratch yours...

You will, of course, remember I reported him getting the job and getting the boot and I knew he wore the Number 9 shirt in the 1990 World Cup.

Incidentally, have you read Garry Nelson's 'Left Foot in the Grave'? I recommended it to your Researcher one night in the Sports and Social. I have a friend who used to live in Brixham, so I have some affinity with the Gulls.

And being a Wednesday fan I can tell you we currently have your best ex-player, David Graham. He scored a hat-trick in the Reserves today.

I think it's a bit harsh calling Javier Mascherano a flop. Think he's only started one game for the Hammers and he was their best player.

Wait til he's had a few months at Liverpool. I reckon he'll do fine

come on big guy, the euphoria surrounding him and tevez and he can't even get in the team past hayden mullins? and that's no disrespect to mullins, but mascherano shone in the WC and did nob-all at West Ham. I hope it works for him at Liverpool, he's a good player, but sadly he must be called a flop for the Hammers

and sorry for forgetting to mention bob kiley. the big money flop behind renovating the underground, which is still shit